These extremely talented musicians laid down the basic tracks with me on 'Songs for Grownups'...

Guitarist, Matt Beck, trying to figure out one of my weirder chord modulations. "Uh, Dean, are you sure there's such a thing as a Z minor 7 half diminished?"

Drummer, Frank Vilardi, listening to Howard Stern on the radio while nibbling on a cymbal. A new slant on the term 'tasty' drum fill.

Bassist, Ken Rich, proudly displaying his really, really shiny and extremely red semi-hollow bass guitar. This is a very rare photograph as bass players tend not to grin all that often.

Drummer and good buddy, Gary Schwartz, who played percussion on the album, here tuning a Boing-D-Boing from the Music Atrium. "I can't wait to see the flight case for this thing." 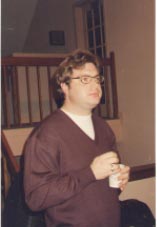 Here's a picture of an incredulous Steve Page (Barenaked Ladies) stirring his coffee between takes at the Honking Goose Studios while recording background vocals on 'Hob-Nobbin', 'Hey, Hey, Hillary' and 'Ayamba-Yaya-hu'.  He's probably wondering how he ever wound up in Peekskill, NY and why there are no decent Canadian comic book super-heroes.

More friends and associates who've been hornswaggled on more than one occasion into working with me on various projects which, like the Music Atrium, are too strange and unusual to easily describe...

Project Manager, Master Puppeteer and good pal, Jim Shanley, in gasmask while sewing fiberglass for the Music Atrium. "I can let a little out on the side. It should fit perfect!" 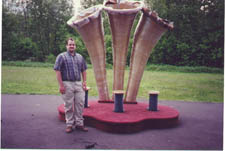 Project Manager and all-around good guy, Bill Spinelli, here explaining the finer points of mounting a 3 seated Honkblatt. "I wish I'd taken those harmonica lessons instead." 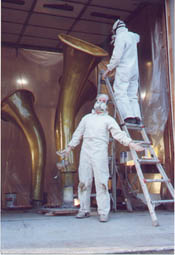 Me and Jim putting a few finishing touches on the 10 foot golden Honkblatt horns. True Fact: The cult film,  Toxic Avenger - Part II, was filmed in and around Peekskill, NY, also the birthplace of the Music Atrium. Just coincidence? Maybe... 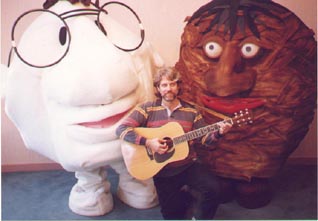 This is me with my buddies Murray the Matzoh Ball and Larry the Latke. They were made by master puppeteer, Jim Shanley. They always do a guest spot at my annual Chanukah Show for Kids. 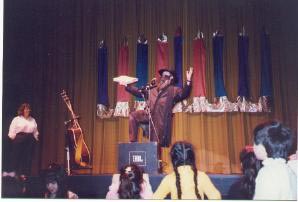 The learned Rabbi Schlamazzel - a wiseman from the village of Chelm -  exhibiting his religious zeal and impressive scholarship at a Chanukah Show. (The kids insist it's really me.)