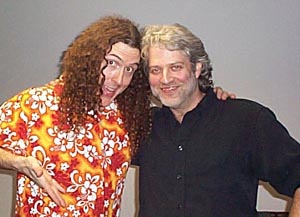 Me and 'Weird Al' Yankovic backstage at Al's recent Halloween concert in Poughkeepsie, NY. I've enjoyed his work for years and my son Sam and his buddy Kiril are huge 'Weird Al' fans and walk around reciting the lyrics to all his song parodies. 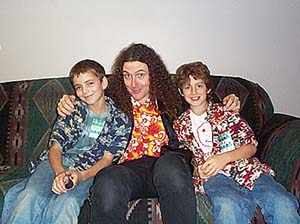 As a surprise we took them backstage to meet Al who in addition to being an hysterically funny songwriter and performer is also a real 'mensch' and one of the nicest guys you'd want to meet. Turns out Al used to play my records when he was a DJ in college radio. Who knew? You can visit 'Weird Al's website at - weirdal.com 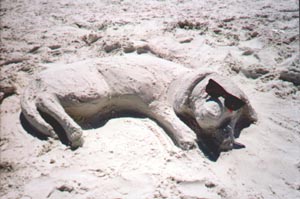 A sand sculpture I did of my good buddy Barker Jones when we were visiting Alison's dad down in Florida last winter. It's a good likeness of him. He used to like lying around in the sun in his shades sipping Pina Coladas, checking out the babes... For a dog, he was a pretty cool cat! 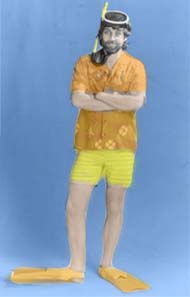 Talk about beach bums. Does this guy look familiar? Here's an old press shot from an aborted single release on BMG/RCA entitled 'Summer Holiday'. (It's a long story.) But the video is hysterical and one day I'll make copies available on the website. In fact, Barker Jones has a cameo appearance in it, along with dancing sharks, a trombone playing rabbi, a trumpet playing monkey, club wielding cannibals and assorted survivors.